Tea on Tuesday- The Aftermath....

Because of  the oppressive heat of  recent days, this morning, I am stepping away from tea, and having a fruit smoothie - 2 kiwis, 1 sliced frozen small banana, 2 grapes (!), and barely a 1/4 cup of almond milk.

In case you haven't been watching the news lately, areas of the east coast got hit with a heck of a storm on Friday. evening. Up to 90mph winds in some states, as this angry storm made it's way from Ohio to the eastern shore, wreaking havoc on trees and causing power outages everywhere.

I first noticed something was wrong, when the tv started clicking on and off. I went outside to ask Mr. Green Jeans to come in from the garden to check it out. While walking to the garden, a giant bolt of lightning came earthward -and I turned tail and ran back to the house. No brave soul I....!!!LOL

I went in the house, then out onto the front porch to check out the storm - and the roar I heard - combined with the sound of the fans from neighboring chicken houses, was UNbelievable!!!

I knew this was no ordinary storm - I ran back inside and out to the garage to tell D/H to hurry up- and the air pressure on the garage door was holding it shut. I got it open and ran thru the garage- when I got to the outer door, the wind was just too wild! I ran back in the house, got the dogs and ran down to the basement into my daughter's room. Yup, I admit it, I am NOT brave when it comes to heavy winds and big storms in the dark!!

The sky lit up with some fantastic and scary lightning. The power was out, the generator kicked in, the computer was down.
Of course, my camera battery was low (wouldn'tcha know!) - every pic I tried to take of the lightning (when I ventured out of the basement!) just didn't work. And, there was not enough power in the camera to take a video of  what was a really fantastic, albeit frightening, light show.

D/H managed to get a few things off the front porch before they blew away. The wind was probably about 50+ mph (if not more) in certain gusts!
It managed to lift some 10 lb planters off the porch and toss them all around. All those lovely rusty things I had planted full of flowers at our Valley Gals meeting were a mess.

But, all things considered - we got away easy!! The power came back within 24 hours- just before the propane was about to run out. The computer came up last night, we got texting back on Sunday night. And, we only had a few trees down - unlike alot of other people.

A neighbor had a tree fall on her house, another had a full sized tree narrowly miss his car. Our postmaster started walking and hitching  a ride to work, when his lane was blocked by a fallen tree. He had to go into work (since neither snow, sleet, hail, nor fallen trees apparently, keep a mailman from his appointed rounds....)The 2 men regularly scheduled to work - had storm issues to deal with. One lost the roof to his chicken house, the other had his carport collapse on his vehicles. Lanes and roads all over the storm areas were blocked by downed trees. Streets and lawns were carpeted with fallen leaves. Some sections of town are still without electricity. 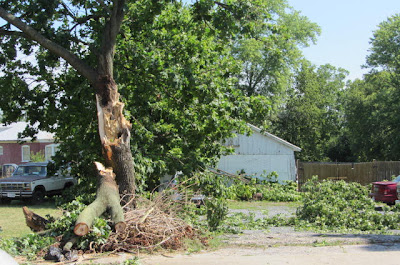 In Northern Va, where we used to live, schools, fire depts, and even the mall, were open 24 hours as "cooling centers", for those w/o electricity and a/c.

This was an unexpected and forceful storm, but so mild in comparison to tornadoes in the midwest, forest fires out west, and hurricanes at the shore. We have alot to be thankful for..........

It was just a wake up call to the ferocity of Mother Nature.

Please join us for every Tuesday for tea- drop by Patty and Kim for a list of other tea lovers!

Posted by ooglebloops at 3:41 AM