Busy day today- met with friends in the morning to rummage thru the old mill (see earlier post about this adventure).

I forgot to bring a snack, and after an hour or so, was about near collapse, when the owner of the mill came to the rescue with a bottle of butter pecan Ensure!! YUM!!! Note to self - don't leave home without food!!!

One the way home, I had to stop for a last visit with a pet client, whose owners are returning today. Hugs and sloppy dog kisses all around.

Then, with my Ford Escape filled to the brim with rusty bits and treasures from the mill, I headed home.
Next stop was to grab a quick bite, feed my horses, and run to a friend's to socialize some lambs.

Yup, that's what I said!!!  The friend's daughter is raising the lambs for 4H, and they are out of town. Their housesitter can't handle the lambs, so, in order for them to not be totally wild when the owners return, they need daily attention and human bonding of sorts. I play with them M-F and their former owner takes over on the weekend!

I was almost home, and happened to see some birds dive bombing something in the center of the 2 lane road. As I approached, I realized it was a crow - and saw it was still alive.

I pulled over, ran out, and picked up the crow, and put it in the bushes off the side of the road, thinking nature would take its course. As I drove away, and looked in my rear view mirror, I saw the birds were still dive bombing him.
Soooo, I rushed home, got a crate, went back, picked up the crow- who, by this time, had a few more of his wits about him, and was feebly cawing at me. He was not in a position to offer any  real resistance. I put him in the crate, which was a bit too small- crap!  I drove down the road, holding the lid gently closed, so as not to crush Mr. Crow's tail!

I called the vet to see if I could get some help for him or have him euthanized, if his injuries were too serious. The one bad thing about living in the boonies is that the appropriate animal services are usually a great distance away.

I took the crow home, went over to the pole barn, and opened the crate. His wings were fine, as were his neck and legs, no blood anywhere - he appeared to be stunned by a head injury. He walked away from me, and promptly did a somersault, landing on his back, looking very perplexed. 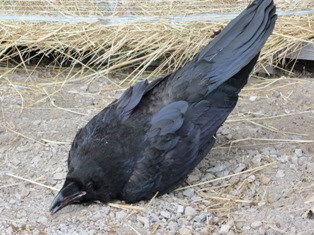 He righted himself, and staggered over to the round bales, giving me the evil eye- as crows do so well!! LOL 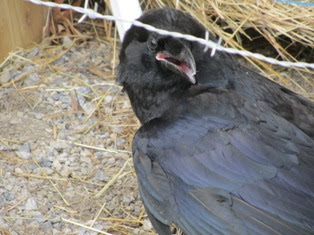 I decided to leave him for a bit -all this activity was stressing him out alot. The pole barn was a safe haven- no cats, dogs, or dive bombing birds.

Some birds who accidentally fly into windows and don't do serious damage to themselves, just need a bit of time to come around. This crow may have swooped too low, trying to avoid his attacking mob, and been nicked by a passing car. In any event, if he was not better in a few hours, I was planning to take him to the Va Wildlife Center. 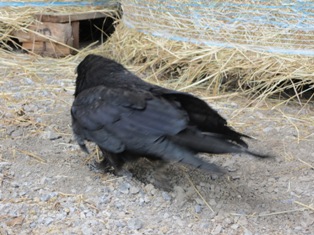 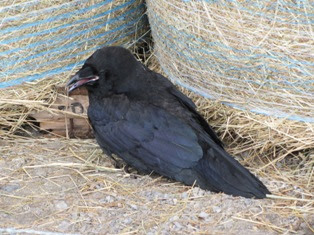 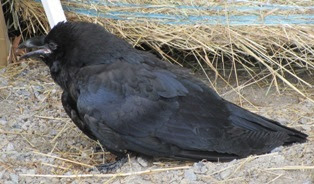 Checked again when I came back from lambie play time, crow still there. Another hour passed, I went out to check on the horses, and the crow was gone!!!! YAY!  I searched behind the bales, and in the tall grass surrounding the barn, but he was nowhere to be found.

Had I left him in the road, the crow would have surely been run over by an oncoming car or pecked to death by the angry mob!! I know most people would just drive by, but I just couldn't.

He was a gorgeous bird - surprisingly light for his size, with glistening blue black feathers. Since we live not far down the road from where he was found, I have no doubt the crow is winging his way back to his own territory.

Posted by ooglebloops at 4:32 PM