Boy, Tuesday rolls around fast, and sadly, it seems that is the only time I post lately.
Sad commentary on things, when I don't find time to write, when there is always sooo much to talk about!!!!

This morning, I thought, since I have already bored everyone on FB with my pictures and videos of my new baby donkey- that why not spread the wealth and bore everyone in blogland with the same?????

This past Saturday morning was the day - the day that Finnegan, (formerly known as Li'l Stevie) came to live with us!

Finn was born in January- I met him a few hours after he arrived  into this world.

He has been living with his parents for 8 months. Altho' his big brother Yoshi, was over a year old when he left his mom and moved here- River and Ocean's owner, Jean, decided it was time for (Li'l Stevie) Finnegan to move in with his brother!

The first few days of his life, Finnegan was thought to be a Fiona.......then it became quite obvious that HE was not a SHE!

As soon as his tiny hooves hit the ground, Finnegan was feisty and fierce, or as Katie calls him - FEROCIOUS ! He was not afraid of anything and would nibble and bite, and drive his parents crazy! Yoshi, on the other hand, was very quiet, retiring, and so laid back. I was hoping for similar personalities!

Saturday morning, Mr. Green Jeans drove the trailer over to pick up Finn, who needed a little convincing and some pushing from the rear, to get him on the trailer. AS we all know, donkeys won't move, if they don't want to - no matter what their size!!!

He rode very nicely, with Jean in back with him.

Altho' not lead trained, he walked off the trailer like a little gentleman, and into the paddock. We kept him separate for a while, so the horses and Yoshi could get acquainted thru the fence. 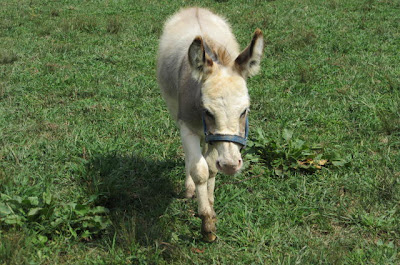 at 8 mos old, Finn still has his baby fuzz


By lunchtime, I let Yoshi in with his little brother. For a few minutes they played it cool, then Yoshi decided to show Finn who was boss around here and chased him around the paddock for a solid 3 minutes. They were both worn out- it was a bit hot out. They took turns following each other, with Finnegan nipping at Yoshi's neck and face, and Yoshi letting loose with a few well placed kicks, to put this little whippersnapper in his place!!


The first day, Finn stuck to Yoshi like glue. 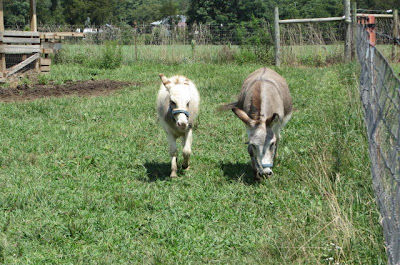 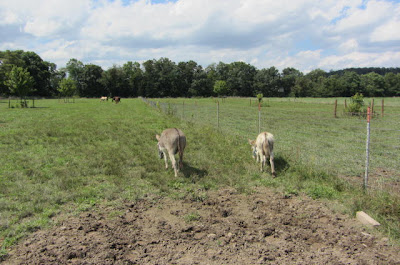 Yoshi's expression reminded me of a well loved Robert Louis Stevenson poem, from A Child's Garden of Verses, circa 1913

By day 3, they act like they have been together forever, altho' Finn still sadly tries to nurse, and looks very depressed, and occasionally brays in response to the donkeys who live a few fields away. It seems like he is asking, are you my mother? I am probably anthropomorphising, but weaning has to be hard on these little guys.


The horses were mildly interested in this new arrival. They are kind to him, and I hope he does not start chewing on their tails!! We got Yoshi over that bad habit, and the tails are starting to look good again!!! Time to get out the NoChew spray again!!!

Please drop by for tea every Tuesday, and visit Patty and Kim for a list of other tea lovers
Posted by ooglebloops at 4:57 AM