A while back, I decided we needed to get another little critter- to keep my old horse company.
I wanted to do this partly to fill the hole left by my miniature horse Miss Lilly's passing, and mostly, because my daughter's 30 year old thoroughbred needed a companion when left alone.
We have 3 horses. Two people cannot go out and ride at the same time, because Mycon is so beside himself when left alone.
So,
here
comes
Yoshi!

I saw Forest Creek Yoshi when he was first born, a year ago, and he was a spindly, adorable little thing. But, he was not on my radar at that time. Fortunately, he was still living down the road a piece, with his parental donkeys, and was still available!
So, we waited 'til he was gelded, and got his tiny hooves trimmed for the first time, and last night he was delivered to our barn.

At first, I thought it might be a good idea to have his dad donkey come along, to help make the transition easier- but his dad had other ideas! Dad donkey absolutely refused to get in the trailer- even sitting down on his butt to avoid being pushed into doing something he did not want to do!!! And kicking his owner!!!

As it turned out, and all things happen for a reason, dad donkey was not needed.

But, old Mycon, being true to his Mycon self, saw this little donkey and totally flipped out!!

He apparently forgot that he used to live on the premises with another donkey- but this little mutant horse like "thing" just put Mycon in a state of abject terror!! As I recall, so did the first donkey he ever saw years ago!

Mycon has never been fond of anything other than horses, hounds, and humans- if it does not fit into any of those three categories - he will do his best to get away from it- and in a big hurry!!!

Last night, Mycon did NOT disappoint!!!

He caught sight of the mini donkey,  pulled away from my daughter, and was literally shaking in his stall, with a heavy chain stall guard across his escape route to the paddock. From almost a standstill - this 30 yr old retired hunter jumper propelled himself over the 45 inch high stall guard and thru' an opening that was about 3' by 3' in diameter! Clean thru'- legs tucked in perfect form!!!

UNbelievable- the old guy still had it in him!!!! 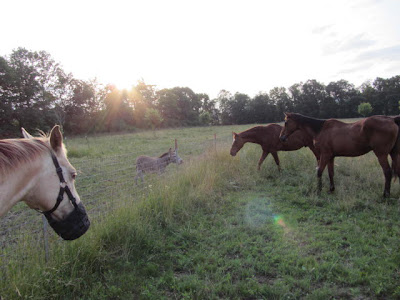 Yoshi was put in a separate paddock, and everyone approached the fence- with big brave Mycon peering over everyone's shoulders - to check out this odd little newcomer.

We went out to check on them this morning- and little Yoshi let out a bray that echoed off the mountains!!

He was so glad to see a human - he really did want to be in with the big guys, not all by himself behind a fence!!! 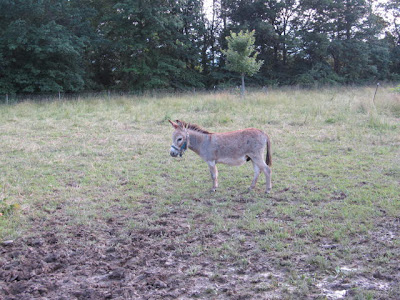 He is absolutely adorable, and learning to take treats and be brushed, hugged, and loved- and he is apparently our  new
"early warning system"!

As soon as he sees me (or my daughter) he lets out a huge braying hello!!! His former owner barely ever heard a peep out of him!!! I guess his parents did all the "talking" for him!! 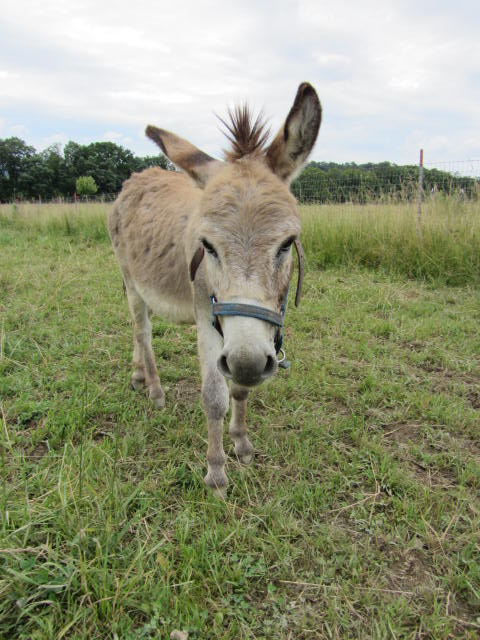 Anyway, I put all 4 together this afternoon - it took just overnight, for Mycon to overcome his fear. Surprisingly, he was the most curious, walking up close to smell this little foreigner!!!

Yoshi is dwarfed by them all.

Cisco, the kindest of our lot, was actually the one who tried to bite and chase poor Yoshi- so Cisco has his grazing muzzle on.
Prince John, the boss of the group, is pretty unimpressed, and doesn't really care about the donkey, as long as the donkey knows his place, and who the ruling Prince is!!LOL 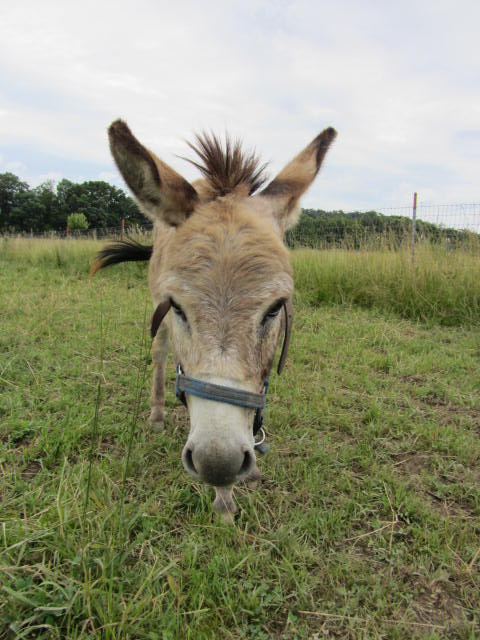 Now, Yoshi can live 35+ years- he's only a year old - so barring any misfortunes(fingers crossed) I guess he will be in the will- to be left to my daughter!!!
Posted by ooglebloops at 3:33 PM