Today, my tea post is not on the cheery side, and I do apologize for that. But, it is one that needs to be brought up - especially for us who like to have clean water available for our tea!!

Remember the old Beverly Hillbillies tv show - the Clampetts made their way to Beverly Hills and a huge mansion thru the discovery of oil on their property - Texas Tea, as it was called in the theme song.

In the shadow of the never ending BP debacle, another oil controversy is emerging. This one is in danger of "attacking" where I live.

Hydraulic fracturing, or hydrofracking- digging for oil in the shale below ground. We here in Va, have the fortune, or misfortune, in this case, of living over the tip of the Marcellus Shale.

Several months ago, there was a meeting in the next town, discussing the pros and cons (mostly cons) of allowing the big companies in to establish wells in the fields and forests right here. I did not take much notice, not realizing the enormity of the situation.

Now, I do realize the necessity of oil in our lives. What I don't agree with, is the lying, cheating, and misinformation, and resulting damage to the earth, that gets that oil into our lives.  Something has to change!

Last night, I watched a documentary on HBO - Gaslands. What an eye opener that was!!! If watching the tap water coming out of a kitchen faucet shooting up in a huge flame when a match is put to it doesn't get ya', seeing film of desecrated land, animals dying, horses losing their hair, people becoming ill from the invisible pollution from the digging, fracking chemicals, and condensation tank emissions, might just cause you to think a minute.

On today's to do list, is to send an email to the local organizers, to find out the status of the applications to drill. Better late to the party, than never attending!

The North Fork of the Shenandoah River is downstream for the proposed drilling site. That's "my" river below.

If you want to learn more about this, and to see if you live in an area that might be affected some day, watch the film Gaslands by Josh Fox  Another film that was shown locally, and I missed seeing, is Split Estate.
Also, google, hydraulic fracturing, hydrofracking, Halliburton loophole, gas drilling and its effect on the watershed. One link will lead you to another, and another, and another............. 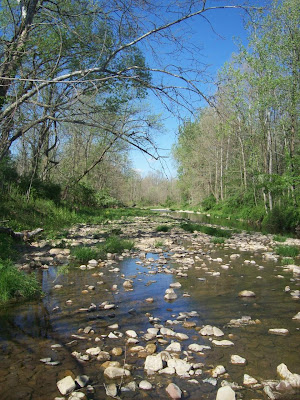 For more light hearted Tea on Tuesdays, please visit Patty and Kimmie for a list of other participants. Be sure to check out Kimmie's beautiful art work, depicting wildlife who are effected by the BP oil spill.

Please feel free to join us for Tea on Tuesdays- the more, the merrier!!
Posted by ooglebloops at 5:11 AM