Return of the Urbanites


For me, autumn really begins with the Annual Descent of the Urbanites Camp Out.
This is the 2nd year in a row that we have hosted my 28 year old son and a crowd of his urban artist and musician friends in our back field. 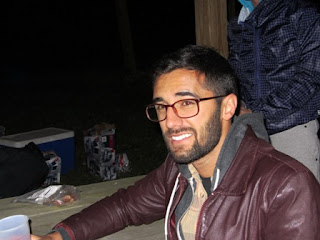 Altho’ Michael (above) attended JMU and graduated from George Mason, until recently, he lived in DC. Now in San Francisco, he is working as an accountant for PricewaterhouseCoopers. Accountant by necessity, musician in life.


This camping extravaganza was organized last year, with an “Oh, by the way, mom, I’m going to have a camp out at your place in October with about 15 of my friends! You can read about it on Facebook. You don’t mind, do you?”

Well, we didn’t mind, and Mr. Green Jeans ,(aka Larry McNally), and I look forward to this now annual outing!!
The campers take care of everything, altho’, there is some set up involved prior to them showing up! 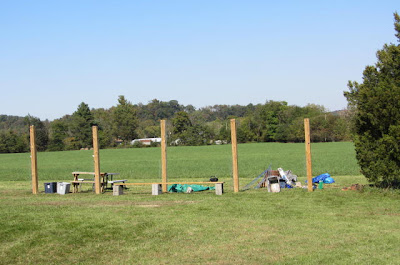 Here is Michael's FB page invite (I didn't see this one either, until after the event !! LOL) -you have to know him to fully appreciate the humour:

What the Spirit Tells Me (and how it carried me away)- a Camping Trip:

358 days following Trip I, we embark on Trip II. It will be the same, but different. The same in most aspects. Different in ways I'm not yet sure. Though, I am sure of one thing - I want to hug you all.

For those unaware, the trip takes place on my parents' land in Fulks Run, VA. They own 40+ acres.

We will depart at roughly 1pm Saturday afternoon and arrive between 3 and 4pm, in the style of a funeral caravan. We'll pick up and leave on Sunday whenever those with cars choose.

Things to bring: everything

I've invited more guests this time so we absolutely need people who have cars to volunteer their services. Especially since there are a handful of people who are coming from out of state (myself included).

If you can drive, please make note in the comment box below.

What - A camping trip

The day before they arrived, Mr. Green Jeans set up the camp area- mowed a section of the hay field, connected 8 heavy duty extension cords of interminable length, to reach from the house to the “band stand”!
The band stand consisted of 3 sections of plywood on the ground for the drums and amps. Next year, we hope to have a hay wagon for the band! 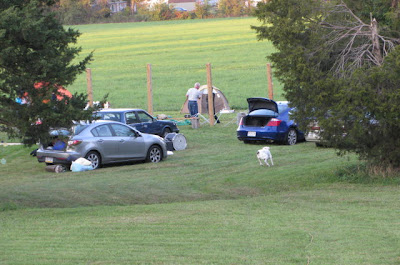 Larry set up a fire pit, with half a metal drum on a cement slab, dragged out picnic tables in the tractor bucket, and strung a strand of tiny white Christmas lights along the top of our partially completed grape arbor.

Since Michael couldn’t carry a tent on the plane, his dad set up his own huge 40+ year old tent (saved from the party days of his youth)!! 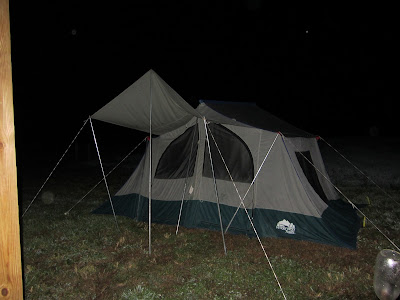 I did the food prep and baking. The campers were bringing their own food, but last year we made them breakfast, so it’s now kind of a tradition!

I baked 2 caramel coffee cakes, pre made 2 egg casseroles (local recipes provided from the ladies at Fulks Run Grocery), got 5 dozen locally grown eggs also from Fulks Run Grocery, and made sure we had enough paper plates, cups and plastic utensils- so there would be minimal dishwashing!!! I so did NOT want to clean up after all those people!!!
My daughter, Katie, volunteered be the Sunday morning chef, cooking for 25. Bless her!!!!
The first carload of campers arrived from DC, at about 5 pm Saturday. We had a total of about 8-9 cars, 10 tents, maybe 20-25 people. I never did get an exact count of attendees!

Last year, we had a little city dog camper – Pixel was a tiny white terrier with a brown dyed mohawk (very urban chic!), who had a blast, doing everything my big country dogs did, right down to swimming in the river! Pixel and his owner did not make it back this time, but this year’s token city dog was an adorable little shih tzu, Wicket, who followed his owner everywhere, and had the best time! 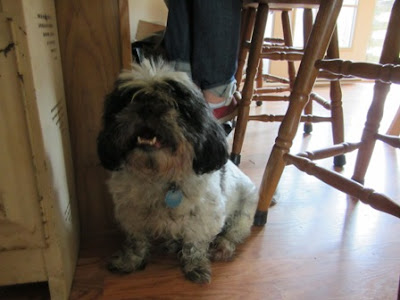 The local economy again had a boost, from the last minute food shopping, as all the city “kids” drove into town.
The tents were all set up before darkness fell, the fire was roaring, and the campers set to making their dinner. 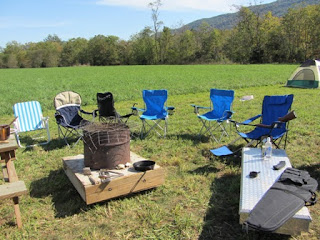 All were told, if they needed the bathroom, just come into the house in thru the garage, and use the facilities!

One girl, Kate, from Philly, was so happy to just be out of the city for two days (as I think they all were!), and thanked us profusely for letting everyone come!

Everyone just thought the Gap area was so beautiful, the leaves were just starting to turn color here and there, and the weather couldn’t have been more perfect!

The neighbors had been forewarned about the campers and the music!  The band started at about 9pm, and played on and off ‘til about 11:30.There was a few second break midway thru, to listen for the coyotes, who might have been singing along..... 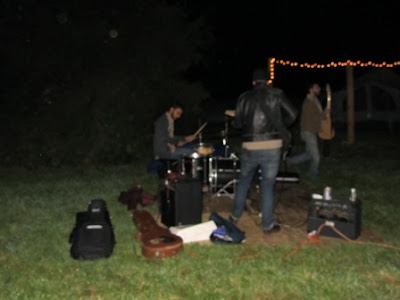 (Mike McNally drums, Philadelphia Tom, back to camera, Kyle, DC)
The parents (that would be Mr. Green Jeans and I ) retreated early on – this was not OUR party, after all!!!The party probably went on until about 2 or 3am. 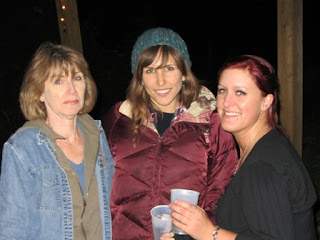 Morning came, and thank goodness, the fog was minimal, unlike previous days, when it hung around ‘til almost 10am! 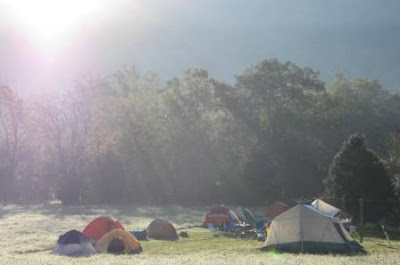 Lauren Malechek, my son’s girlfriend from Berkley, CA, was up at the crack of early, cleaning up the campsite. I found her later, sitting in a camp chair, with her watercolor journal in hand, gazing at the mountains, in the direction of Garnett Turner’s cabin situated above Chimney Rock. Lauren really wanted to do some plein air painting, but there is just so much you can do in a short 24 hours. 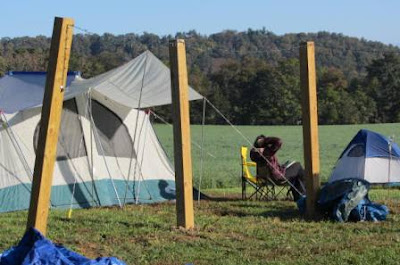 At about 10am, my daughter Katie made a “rockin’ “ breakfast, as one guy described it – delicious down home, artery clogging cooking – mounds of eggs, bacon, sausage gravy with biscuits, along with the coffee cakes, egg casseroles, coffee, tea, and Showalter’s apple cider. Everything was pretty much devoured! Every seat in the house was taken, standing room only! No Sunday morning brunch is complete without political discussion – a lively round between liberal Philadelphia Tom, in his red, white and blue tie dyed t-shirt and ultra conservative Archie Bunker (aka Mr. Green Jeans). They parted friends (whew!), agreeing to disagree!
Later, the two got together outside, over guns no less!! 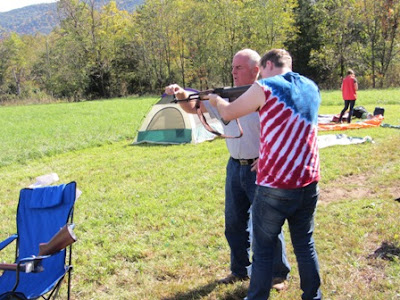 Larry gave shooting lessons to all who wanted to “play”. Tom is an expert with a video game gun, but admitted that shooting the real thing is a whole other ball game! Even the girls got to try – with an AK-47, a 12 gauge single shot shotgun, and a target set up in the field. Last year, one of the campers was very proud of the bruise he received from the rifle recoil – something to talk about at the office on Monday!

The only things they did not get to do this year were crossbows and tractor driving!! Not enough time, and the tractor was hooked up to toss the hay for baling. We timed it WRONG again this year. Another day or two - and we would have had all this urban muscle to help load and stack the hay bales. We will have to set up a better plan next year!!!! 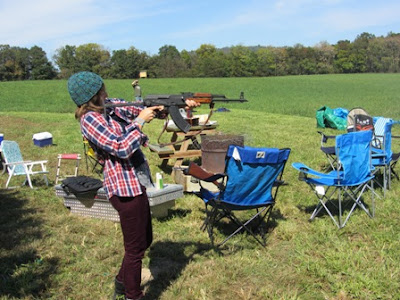 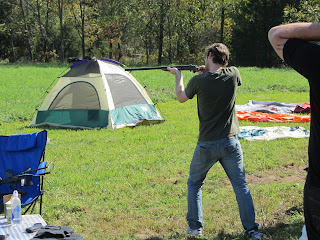 Patrick (not pictured) from DC, is a self-proclaimed foodie. A fan of RoadFood .com, he was excited to discover that Fulks Run was the home of the famous Turner Ham he had heard about on NPR. He was extremely disappointed to find out they are closed on Sunday!!! Patrick will just have to show up earlier at next year’s camp out! I did run to Fulks Run Grocery on Monday and get a package of sliced ham with cooking directions and a Turner Ham brochure to mail out to him.
The other big highlight of the camp was my little Forest Creek’s Yoshi. Yoshi is my year old mini donkey, and he was the star, and loved every bit of attention showered on him!!! Ever the little watchdog, with a loud braying warning system, he quickly figured out, that if people came in with me, they were ok! (Sofia and Yoshi, foreground/ Jimmy and Cisco, behind)
Everyone was so surprised to discover that donkeys come in miniature, and this was as big as he would get!!
Sofia from Maryland was entranced, and had several visits and photos with Yoshi. Jimmy, Michael’s former roommate from DC, just loved Yoshi and Cisco (the other star), our big “blonde” quarter horse- and Jimmy was tickled that Yoshi seemed so interested in Jimmy’s fashionable lime green high top sneakers! Everyone thought horses to be such “noble beasts”- with cell phones taking innumerable photos. 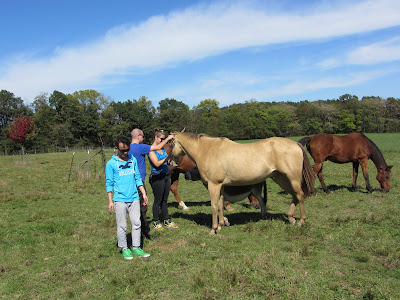 Before we knew it, it was time to go home, and the great tear down and pack up began. 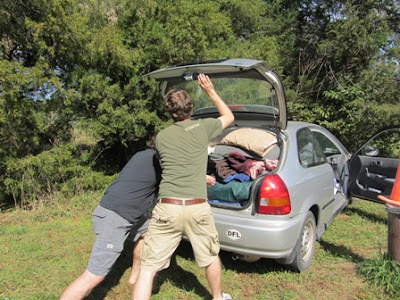 Determined to get it all back IN the car- they did!!

All too soon, it was all over.

Most were packed and gone by 1pm Sunday for the long drive back to the big cities.

Michael and Lauren had a 7:30 pm flight from Dulles, back to SF. We left at 3:30 to drive them. It was a teary goodbye (at least on my part, altho’ I am sure Mr. Green Jeans got a little misty eyed), as we left the young couple at the entrance to Dulles International’s Virgin America Airlines, to head back to their life in California. 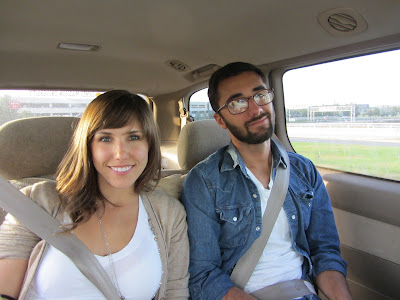 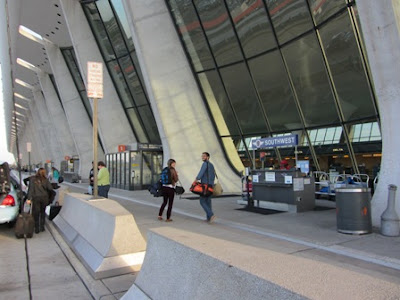 It seems so quiet around here…..I am already planning, counting down the 358 days, and so looking forward to next year’s

3rd Annual Descent of the Urbanites! 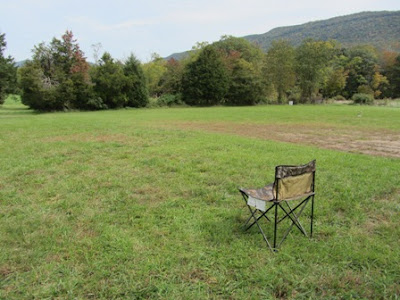 (If you have not read about last year's campout - here's the link )
Posted by ooglebloops at 5:18 AM

Labels: 2nd annual descent of the urbanites, a camping trip, Fulks Run Va, what the spirit tells me and how it carried me away