Since I live in an area where the Civil War was rampant, I thought a little look back in history would be the theme for today!!

Some of this info came from a little booklet, Civil War Plants and Herbs written by Patricia Mitchell , who has written many other booklets  - among them: Victorian Parlors and Tea Parties, Suited to a Tea, and about 45 more from her "Inkling Series"- perfect gifts for an 1800's "foodie" or re-enactor!!!

Civil War tea according to Ms. Hague of that era:- "We had several substitutes for tea......Prominent among these substitutes were raspberry leaves. Many during the blockade planted and cultivated the raspberry vine all around their garden palings, as much for tea as the berries for jams or pies; these leaves were considered the best substitutes for tea. The leaves of the blackberry bush, huckleberry leaves, and the leaves of the holly-tree when dried in the shade, also made a palatable tea. "

Sugar was sometimes hidden underground, to be kept from marauders, and little bugs ended up being added to the flavor of the tea!

Tea and sugar became scarce and extremely pricey, as did coffee. Leaves from willow, sage, blackberry, currant, and vegetables came into use for teas. Syrup and sugar was created from watermelon juice, or honey or sorghum was used in place of "real" sugar.

Since our raspberry and blackberry bushes produced almost no fruit this year, due to the "lovely" drought we are in the midst of, I may have to traipse out there,  collect some leaves, and make some tea!

Since I have not decided on what tea to have today- please enjoy some horse pix instead!
Meet  the newest member of our equine family- CISCO!!! He is a 9 year old, push button, registered, champagne buckskin quarter horse. In short- a real sweetie!!! And, as he demonstrates, real men can wear purple!  LOL 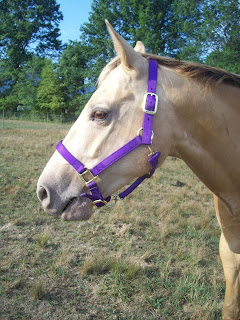 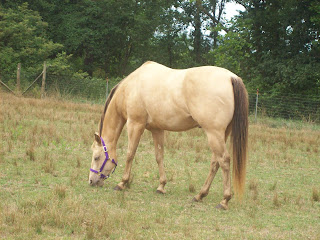 Please join us for Tea on Tuesdays. See the sidebar in Kim's blog for a list of other participants!
Posted by ooglebloops at 8:27 AM