I have been carting around my Great-Aunt Taimi's old lamp for years now.

I got it from my grandmother,Olga, Taimi's sister, who was going to toss it in the trash! In the 70's, my Grandma was moving out of her apartment, yet again, and was purging alot of stuff- some of which I still have to this day!!

My Aunt Taimi was a very tiny Finnish lady, married to a well to do artist named Leo Whelan.
They never had any children, but apparently Uncle Leo showered his little Taimi with all sorts of pricey gifts.

There was something about this lamp that just told me the trash was not where it should end up. Plus, I kind of liked it !!!!I guess I am drawn to things that are kind of "fugly" ! And, dressed up with a new silk shade,this double bulb lamp is still in great working order. 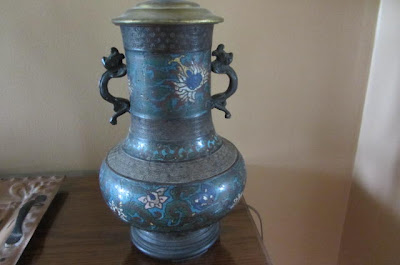 A few years ago, I found a very similar style vase for a few dollars at a rummage sale, and figured it would make a good companion to Aunt Taimi's lamp. Maybe, someday, I would turn it into a lamp also. That someday has yet to arrive!!!LOL

Here the "newcomer" sits, high atop a cabinet, with a bird's nest for a hat! 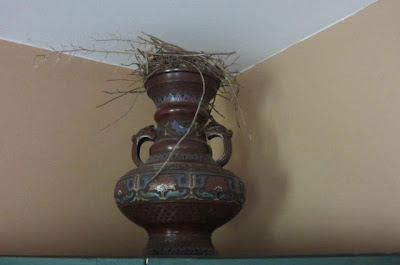 I never knew anything about the lamp, or the vase for that matter, and my research never turned up anything interesting or earth shattering. Probably, because I did not know the right descriptive phrases to use !

While reading a recent issue of Antiques Roadshow Insider, I notice a lidded jar - Ming Dynasty (and NO- Aunt Taimi's lamp is NOT Ming Dynasty- sadly!). But, one piece of info lead to another and the right descriptive phrases turned up for me to  google and research.

It apparently is NOT a type of cloisonne, as I had long thought.

It is a different process, and Japanese - CHAMPLEVE ("shahm pluh VAY")** which means a  surface showing more exposed metal. Metal is etched or hollowed out and filled with enamel which is then fired.  In cloisonne**, the surface is mainly enamel, the designs formed by wire and then filled.

I am not sure if mine is bronze or some composite "pot" metal. But, it appears that style was popular between the 1890's to early 1900's- some vases/urns/lamps were dated earlier than that. That time frame would be prior to Taimi's married years, but this lamp was something she obviously coveted, and Uncle Leo obliged her. 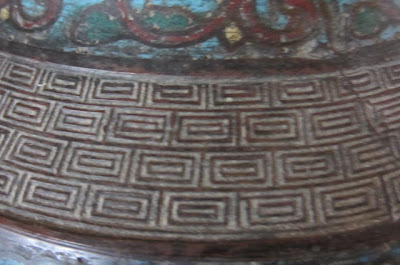 Today's online prices for similar pieces cover a wide range for that size vase or lamp- from a low of $200 to a high of $2,000. All depends on quality, age, and the price the buyer is willing to pay! Now, if it was MING- I could be holding a hot  million dollar vase right here!!! Sigh...... 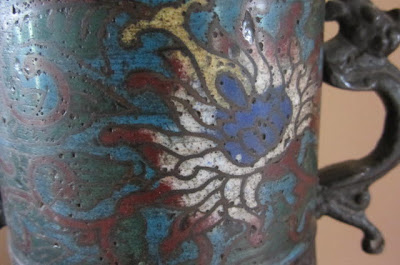 Since I have no intention of selling either piece- Taimi's or the rummage sale score- guess I will just write the history on a piece of paper (as I am  wont to do with vintage items) and tape to the bottom of the lamp and vase- so when my kids inherit my crap , er, uh, VALUABLE collectibles- they know NOT to throw away their Great Great Aunt Taimi's lamp!
Posted by ooglebloops at 1:32 PM