Normally, when I step out on my front porch, I would be hard pressed to know there is a river just a few hundred yards from my door. After last night's  heavy thunderstorm, the roar of the now roiling river rushing by is clearly heard.

But, yesterday morning, there was a new and steady hum, that harmonized with the early morning bird songs and the river- even overpowering the river's tumbling notes.

It was not spring peepers, it was certainly not distant farm machinery nor the familiar cricket chirping.

It was a sound deceptively soothing, but I could not place my finger on its source.

Slow, steady, and constant- almost a singular hummmmmmmmmm. I was baffled!

I stopped by the local grocery store, where my friend MaryAnne works. Whenever I have a nature question that is beyond my scope of knowledge, MaryAnne is my local go-to person!!


Now, I am very familiar with the summer buzzing of a cicada. During childhood summers in Rhinebeck, NY, I used to collect the cicadas' shed outer shells  that I found clinging to trees. If I was lucky, and that did not happen often, I might even catch one in the act of "escaping". I knew the sound of their individual song.

But, yesterday morning's song was different- apparently, because of the sheer numbers in the chorus. Their alien harmony floated in the breeze down from the National Forest and surrounding wooded areas.

These cicadas are were heralding their early arrival. En masse, after 17 years, the emergence of the periodic cicada seems to be at least 2 months early.
Our mild winter, and unseasonably warm temperatures have brought to life a massive population.

I was told this is NOT the year for orchards to plant new fruit trees. Female cicadas like to burrow and place their eggs in the tips of newly sprouted branches of fruit trees and certain oak trees.

Mr. Green Jeans planted a row of sapling fruit trees last year. Now, I guess we will have to check for roughed up bark and cicada damage. If the little buggers make it down the mountain to us.

Today, I went up to the forest and took a video of their song, and went back later to where our friend Tim was camping, to get closeup photos of the little buggers.He had gotten quite a few good photos of the different stages of emergence.  There were shells and cicadas EVERYWHERE!

The cicada birthing /hatching is about complete. There were a few whose wings were still in the process of drying out. Most were clinging to blades of grass, with their stained glass wings unfurled. Others were leaping onto my jeans and my back, clinging on long enough for a photo- 'til I sent them on their way!!

Alot of people here call them locusts. Where I grew up in NY, a locust was a type of grasshopper. Familiar with the phrase "a plague of locusts"? No matter what you call them, a plague is a plague - whether there are too many grasshoppers or too many cicadas!

A cicada is large insect where the male makes kind of a shrill sound: about and inch or 1  1/2" long winged insect that lives in trees and tall grass. It almost looks like a fly on steroids!! Family: Cicadidae A  locust is a swarming, migratory grasshopper that often swarms and devours crops and vegetation. Found in southern Europe, Asia, Africa, North America. Family: Acrididae

Have a look at just a few of the gazillions inhabiting the forest right now!!!
If you are bug phobic- don't go any further!!!! You have been warned!!! 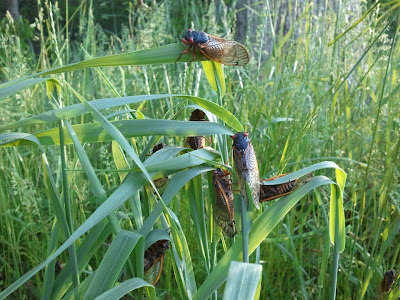 ( photo above courtesy of Tim Puckett)


Yup, he's posing for a photo on my knee 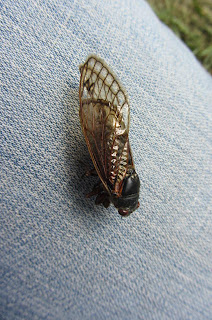 One with almost completely dry wings on left, center dry, and right a shell clinging to the leaf 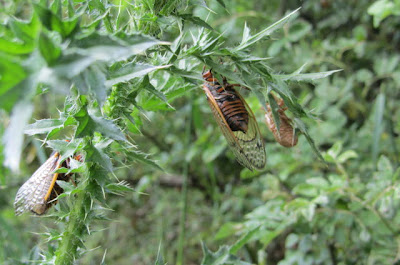 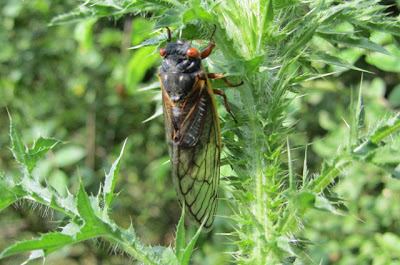 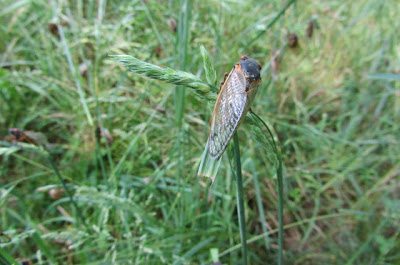 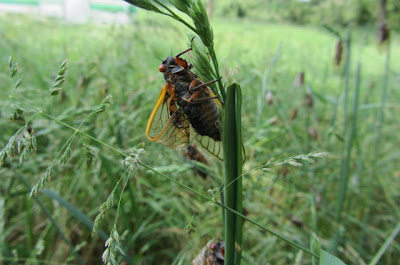 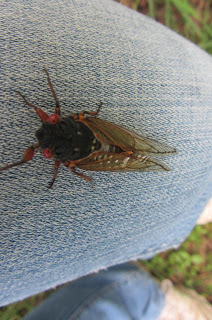 And, if you haven't seen enough cicadas - here's 3 below in various stages of development 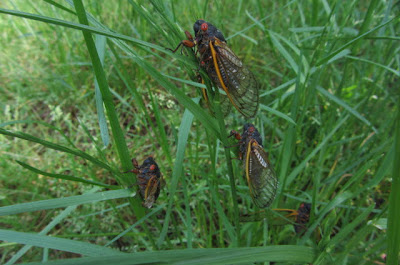 Last, but not least, here's the link to  a video ! Enjoy the beautiful panorama of Virginia mountains,from the overlook at Hogpen, near Slate Lick, while listening to the hum of the cicadas......................if my video makes you dizzy (not the best videographer here !!LOL) just close your eyes and listen to nature.

Posted by ooglebloops at 6:34 PM

Labels: 17 year cicada, cicadas, plague of locusts, Slate Lick, the hills are alive with the sound of ?