Morning comes early - sometimes at the crack of early........

When that happens, I find myself wandering with my camera, or seated at the computer, with a cup of tea, letting the words rattling around in my head spill out onto the keyboard.

There is no organization of thought this morning, but the piercing shrillness of the cowbird, lets me know that the bird feeding station is in need of replenishing!!!

The mornings usually start with the peaceful cooing and whistling wings of the mourning doves, the tapping of the woodpeckers searching for breakfast, cows in the distance bellowing for their breakfast.........then, the sharp whistle of those cowbirds telling me to get a move on!!!!

Cowbirds are not a favorite bird for some - but, I don't mind them. I enjoy watching them twiddle around the feet of the horses, looking for insects. I don't like the fact that they lay their eggs in someone else's nest, sometimes removing that bird's own eggs- to let the other bird raise their cowbird young. But, I do admire the cowbird tenacity - survival of the fittest, and all that!!! 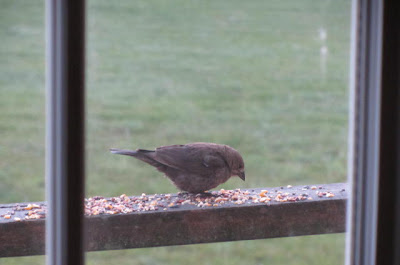 
This is my norm for most mornings. Then, there was this morning!!!

It never fails, when I leave the garage door open (and ignore that nagging voice in my head saying DON'T DO THAT!), someone, or something, enters the garage who does NOT belong! Sometimes it is a bird, sometimes NOT!

As I was getting the feed for the horses the other day (kept in bins in the garage), I glanced down and saw a mouse caught and dead in one of D/H's traps. A further glance came upon a pair of steady eyes watching me intently, tongue flickering.

It was my resident garter snake, (and this one is a big one- at least 18" long, and pretty thick around the middle) who for a while, lived quietly near the back of the house, behind the garden hose. He/she, has since expanded its territory to around the perimeter of the house, also claiming my herb garden atop a rock wall. Favorite sunning spot is now among the fancy plumed grass and hen and chicks.

Now, it seems, the forgotten open garage door was too much of a temptation - or maybe it was the scent of the dead mouse in the trap!
Whatever the reason, there he sat, "my" garter snake- glaring at me, from atop a box, directly above the mouse carcass and across from my feed bins!

Now, I don't mind snakes. I had to remove one from the garage- all by myself- last year, scaring the crap out of myself in the process!!! The snake I removed was young and black, and very aggressive. I had gloves on (fortunately) because he bit me - and then rattled !!!!!

Talk about rattled - I WAS RATTLED!!! After getting this little black snake back to the great outdoors- and then flying up to the computer to research photos of rattlesnakes, I was relieved to discover that young black snakes, and racers, when disturbed, will make a rattling sound with their vibrating tail. They are non venomous. Altho', that does not make getting bitten (even when wearing thick leather gloves) any more enjoyable! Especially when I was unaware of what I was handling when bitten!!!

After that incident, I have decided to let snakes make their own decisions!! Or, let D/H remove them!!!

For Mr. /Mrs. Garter, I left the garage door open a crack, while I went to feed the horses, hoping the scent of fresh air, would entice him/her back outside. I knew if I tried to "encourage" the snake with the broom, it would only retreat behind some boxes!

I have not seen the snake since, so I am hoping  it  made it back out to the great outdoors and my herb garden. I'll be checking out there today!!!! 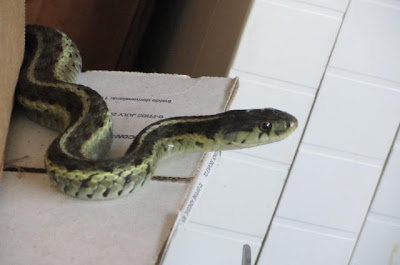 Posted by ooglebloops at 4:28 AM