Yesterday started off as a peaceful and sunny day.
I checked on the horses a few times during the day, which is the usual routine.
At 2 pm, I went out to let John out back. He is so trustworthy, I just let him loose behind the house to graze. He just hangs out.
When I got to the barn, I noticed Mycon, the old man, was gazing, rigid and intent, toward the tree line outside the paddock fence.
I thought maybe the farmer was wandering around out there, so I walked the length of the fence line looking something.
There was nothing there.
A I walked back toward the house, before letting John out, I heard a crashing in the underbrush, and turned around to see something big moving about.
A deer maybe?
I saw it at the same time Mycon did- and he FREAKED!!! I had to run back to the barn, to open the gate and put him back in with his buddies, Mud was flying -he could not get thru' the gate fast enough!!!
Let the snorting begin - John, the leader of the herd, was snorting and stomping and rounding up his little band to keep them away from this dangerous PIG !!!!


I know from past experience, that John is not too fond of hogs. We tried riding past a hog farm several years ago - and when he got a whiff of them, he did an abrupt about face and zoomed all the way home!!!
Now, to have not one, but 3 huge porkers breaking thru' the trees and rooting around outside HIS paddock, well, this was more than he could stand!!!
Danger, danger, Will Robinson!!!! 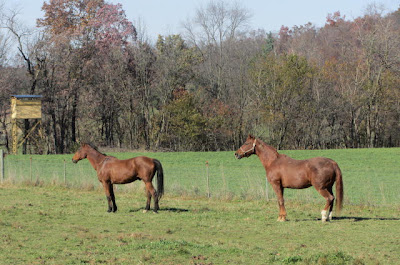 I ran back in the house, to call around and find out who belonged to these pigs. Then I drove around to knock on doors. The folks who owned them were not home- of course...........!
The pigs eventually high tailed it back thru' the woods into the field from whence they came.
A bit camera shy - all I could capture was the retreat!!! 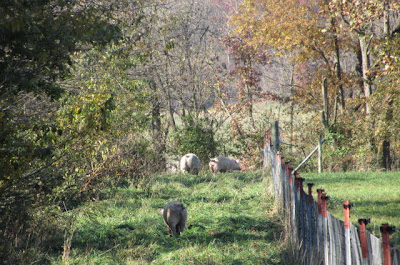 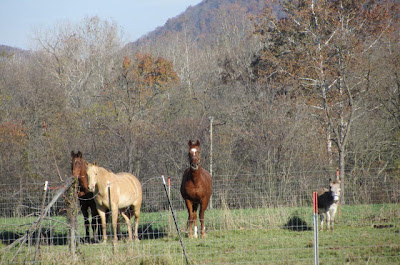 But, later that night, when darkness fell, the horses were still absolutely sure that porcine danger still lurked in them thar'  woods!!!!!!!!! 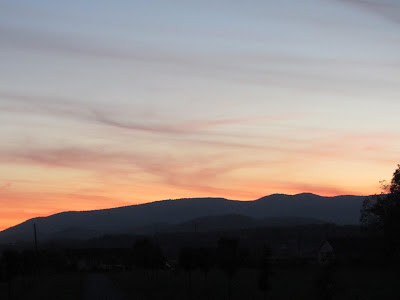 My daughter tried to get the horses in for dinner, and John would have nothing to do with going in the barn! He was on  high alert, meaning no one else was allowed to go in and eat. I went out to see if I could calm them, but to no avail. The usually placid John kept spinning around in his stall, charging the stall guard, in his attempts to get back outside.

So, the only one who eventually got dinner, was the old guy, Mycon. Katie managed to get him inside, keeping him calm enough to eat.


I walked the perimeter in the dark,  to see if I could spot or hear any wayward hogs in the woods, but didn't see any. I am sure the horses still smelled them, and after seeing them earlier, just didn't believe they were gone. Now, they can connect the smell to those big pink "monsters"!!  Scary things become much scarier in the black of night.
We left the outside lights on at the barn, for whatever good that did!
At 6am this morning, I peered out into the darkness, to see if I could see or hear anything. All was quiet down by the barn. No Yoshi alarms going off!!!
This morning there was pea soup thick fog but no hams in sight!!!!

This is looking out toward the barn at 6am- the lights barely visible. 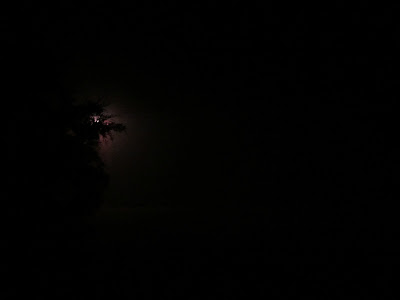 Daylight is finally here, and all appears calm at the barn. I will go out and scope the area, before I bring the dogs out, and before I feed the horses.
Hopefully, the pigs' adventures are over, and they are securely back where they belong!!