Sorry to be late to tea!!!
The farrier came today, and today was the day little Yoshi had his first real shoe trimming.
Now, donkeys can be stubborn, and surprisingly, it went far better than I would have expected!
There were a few episodes of nervous diarrhea (the donkey, not me!!), but with a box of mini nilla wafers being fed to him constantly - we got thru' it rather smoothly!!
Donkeys are smarter than we give them credit for - and I swear Yoshi does comprehend English- he knew exactly when it was his turn!!!
Anyway, we are done, tea is on- see my Finnish tea bag - delicious- but I have no idea what it is! 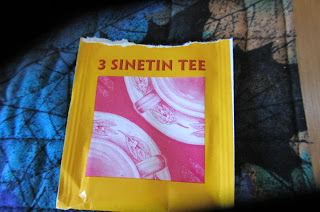 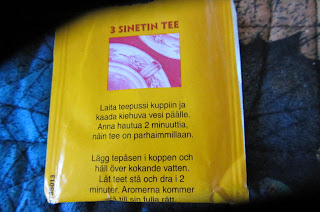 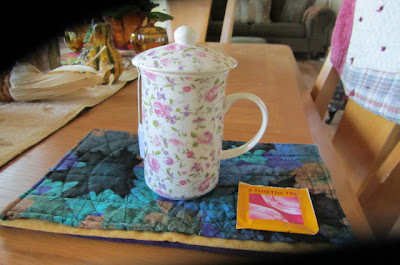 I am using my lidded St. George English bone china mug, on top of my little stack of quilted mug rugs .
Since Halloween was last night, I thought I would share one of the photos my daughter took during "dead time" at a friend's spirit filled house.
The stories from this house are too numerous to tell here - but look at the orb by the door - they were out in force last night. These were not spots on the camera lens- Katie saw them with her own eyes.This one photo had the clearest shot.The photo is a bit blurry because I enlarged it.

Katie used my camera last night, and this morning, the battery was dead, and the lens cover is not working right - coincidence?
I think not!!!!!!!!!!
Have a cup of tea with our other tea lovers - visit Kim for a list of other participating blogs - feel free to drop by every Tuesday!
Posted by ooglebloops at 1:52 PM