Parting is such sweet sorrow.
This post could be entitled "Ode to a Toyota Sienna",or "Homage to My Van" because today is the end of an era, the day we part ways, my van and I.
I have driven this "sand" colored van for almost 12 years, and 277,657 miles. 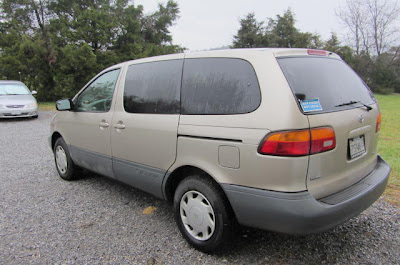 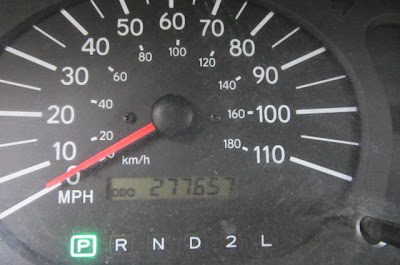 Altho' I knew (and hoped) this relationship would not last forever- the fact that today is the day, came as a big surprise.
My husband called me from work yesterday and asked me to drive in the rain to Elkton- he wanted to show me something. At first, I asked him if what he wanted to show me was alive (!), then he finally spilled the beans.
He was at a car dealer, not unusual, since he works for DMV, but he had been chatting with a salesman, and decided NOW was the time to get me that new car.
WOOHOO!
He had picked out a nice little 2012 Ford Escape- not what I would have chosen, but nice. I really wanted a pickup, but we have 2 already(one classic, one farm use), so............
One of my requirements was a new vehicle had to be able to get out of its own way, and those big semis on the highway. Another was there had to be alot of headroom - I hate that claustrophobic feeling I get when my hair touches the ceiling, or if I bump my head getting in a car!!LOL Plus, the Toyota had a radio control and volume button on the steering wheel - that, to me, was heaven!!! The new Escape has that AND Sirius radio!!! Boy, I'm livin' now!!!
D/H and I did a test "race" from a traffic light, and I hate to admit it, my van met its match- the Escape left it behind! The Toyota is fast, but the Escape was faster.
I felt a bit guilty, almost anthropomorphically thinking the van was sighing in sadness at  the reality to come.
Ridiculous, I know.........

While cleaning out the van last night, I reminisced, with each piece of long forgotten junk, er, uh, memorabilia, uncovered!
I think back to when I first drove  "the van" off the lot, drove it home down Rte 7, only to have a large truck christen it, by showering rocks at my windshield and pitting the hood of my brand new van!!!!On the first DAY!!!! GEEZ!!!
As with all things new, there was no eating or drinking in the new vehicle! Yeah, right......Having two kids, that did not last long!
Next "accident" involved my daughter checking out the cigarette lighter, and burning 2 holes in the front seat! I was reminded of that incident, while removing the front seat cover ( a towel for the dog to sit on!) and cleaning out the glove compartment last night, to discover the cigarette lighter, hidden  there by me,  years ago!! Also found a pair of severely outdated, huge, rose colored sunglasses!!! eBay, anyone??? 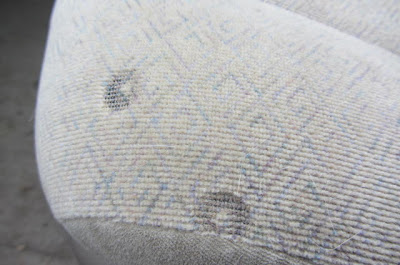 This van morphed thru' different stages of life- from a carpool van, to soccer mom van. Carrying kids, snacks, equipment, to travel soccer games in all kinds of weather.Hmm, flashback memory-we'd be driving to a travel soccer Turkey Bowl next week!!!!
We can't forget moving band equipment from gig to gig!!! See aging band stickers below - "I'd Rather Die" and "Orna Annon" 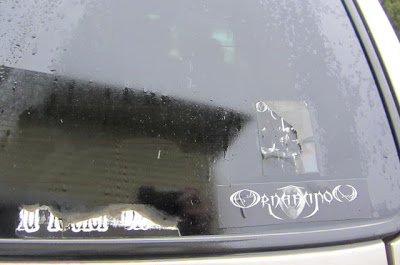 A long ago school field trip to Monticello came to mind- with 5 or 6 Catholic school kids, who chose my van as the "cool" van to travel in! I recall that long drive home, with my daughter and her "crush" in the far back seat, writing of their undying (yet very short lived), "love" in the steam of the rear window.......

My kids learned to drive in this van - if they could drive this, they could drive anything!!
Soon, this van was transformed into a rolling tack box- going to the barn, hunts, and horse shows all over the state, in all kinds of weather. Being stuck in wet, soggy fields,sunk up to the muffler, while waiting for the hunt to return; sitting with the heater on for hours, in the snow, at an NCEL tournament; having specially made( by D/H) PVC pipe saddle racks in the back of the van (seats removed), muddy boots, smelly sweat soaked horse blankets- eating in the van was no longer an issue!! The bumpers (and sometimes the hood) made perfect mounting blocks. The van made a perfect hangout for the kids, between classes or post hunt, to eat, chat, change clothes, radio blaring.
If this wasn't racking up enough mileage, there was my petsitting business. The van carried me faithfully to every stop, in all kinds of weather, also transporting animals to the vet, the groomer, the airport. Sometimes up to twenty stops a day, we traveled everywhere within a 30 mile (sometimes more) radius.The van was involved in mostly happy stories, but there were a few sad. One little Corgi happily survived bloat as my van rushed him to the vet. Another elderly golden died in my van ( from complications of a recent surgery)as did an extremely elderly cat, years later, while we sped to the vet. Another dog was transported to the airport, many animals found new homes with us, traveling in that van.

When we moved to the country, the van was stuffed to the gills with plants, bird cages, ferrets, rabbits, and dogs, and whatever else could not or should not go in the U-Haul..
This sturdy and now aging vehicle became an avid yard saler and hauler of antiques. It learned how to go to the co-op, with back seats now permanently removed, to be filled with 50 lb sacks of feed, grain, and pine shavings. How many square bales of hay can be crammed into a seatless Toyota Sienna?- 12!- if you leave the rear hatch open!!
Two snow storms ago, an ice bump, apparently "stole" 2 hub caps on the right side of the van. I guess they are called wheel covers nowadays!!! Call me shallow, but that right side of the van was a source of embarrassment to me. I was always careful how I parked, when meeting new people- always careful to park the trashy, wheel cover-less side of the van AWAY from view!!! First impressions, and all that!!! 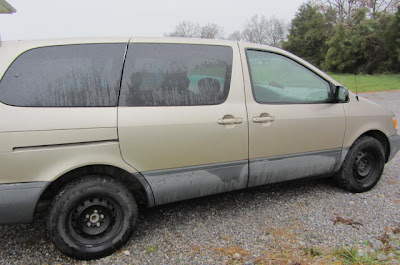 The car or the van- it went by either name, could fly across a sodden hay field to catch up to a runaway dog (Sunny), and even "learned" how to successfully herd a neighbor's wayward cattle who had escaped into that same field.
Our suburban/ urban vehicle metapmorphised right along with us, to a total country machine, tackling backwoods rutted roads and crossing creeks!
The only complaint I had, in all those 12 years, was that no matter how many times we replaced the brakes, with expensive ones or not, they always squealed. There was no sneaking up on anyone, with that ear splitting squeal happening, no matter how gently you tried to step on the brakes!
And now, I feel somewhat guilty, knowing that after years of tender loving care, "the van" is about to be turned over, traded in, and will end up at a car auction - to go who knows where.
I hope whoever gets it, will take enough care of it, to keep it running for a few more years. It is a testament to Toyota and my husband's TLC that it has lasted this long. Maybe it will even experience the laughter of children again, ensconced within its walls, and hugged safely with its seatbelts.They won't have to worry about spilling drinks or dropping french fries- this van is already  broken in!
I would like to think that is the case. In a way, I hope I never see "the van" again, because it would make me sad to know its new life was any less........

Thanks for the memories, old Toyota!!!!!

Sunny, sitting in "his" seat one last time!! 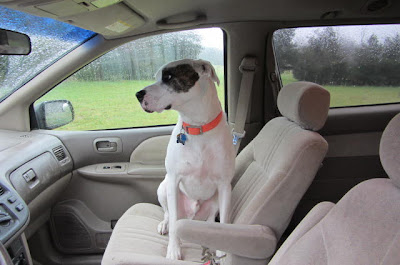 Posted by ooglebloops at 7:56 AM